Kumaraswami Temple (dated back to 8th-10th century) complex located in Krauncha Giri is an ancient Hindu temple complex located at Sandur in the Bellary district of Karnataka, India. Krauncha Giri is believed to be the first abode of Subramanya in south India. The unique feature of the mountain is its elliptical shape with a diametric narrow pass, which attracts many people.

There is also a Parvati Devi Temple (7th-8th century) located nearby. The twin temples are excellent pieces of art and are in a serene place and are surrounded by rose gardens. There is a Rama Temple also on this cool hill resort.

According to legends, this gap is made when Lord Kartikeya pierced the mountain in the battle with the demon Tharakasura, with his Vel to kill the demons who were hidden inside mountain. Women were earlier strictly not allowed to enter the shrine. Murarirao Yeshwantrao Ghorpade lifted the ban on women in October 1996. After the ban was lifted, nearly 3,000 women have worshipped at this temple. 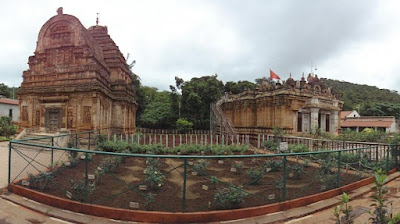