The learned one, who wishes,
For more life, wealth and love,
Should salute with his head,
Lord Ganapathi who is the son of Goddess Parvathi

Think him first as god with broken tusk,
Second as the God with one tusk,
Third as the one with reddish black eyes,
Fourth as the one who has the face of an elephant

Any one reading these twelve names,
At dawn, noon and dusk,
Will never have fear of defeat,
And would always achieve whatever he wants.

Results of chanting this prayer,
Of Ganapati will be got within six months,
And within a year, he would get all wishes fulfilled,
And there is no doubt about this.

One who gets this prayer,
Written by Eight Brahmanas,
And offers it to Lord Ganesha,
Will become knowledgeable,
And would be blessed with all stellar qualities,
By the grace of Lord Ganesa.

Thus ends the prayer from Narada Purana to Ganesa which would destroy all sorrows. 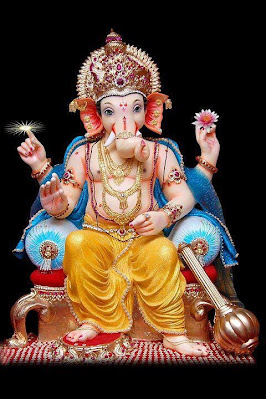