Posted by Abhilash MS
Vaitheeswaran Koil or Pullirukkuvelur Temple is one of the nine Navagraha Temples in Tamilnadu and is the Navagraha Stalam associated to Angaraka or Sevvai or Kuja (Planet Mars- one of the Navagrahas). Located near Sirkazhi, the shrine is about 24 km from Chidambaram, 50 km from Kumbakonam, and 4 km from Mayiladuthurai on the Chidambaram Road. Similar to other Navagaraha Temples, the main deity of Vaitheeswaran Kovil is Lord Shiva as Vaidyanathaswamy and Goddess Parvathi Devi as Thaiyalnaayaki. Lord Shiva is worshipped here as Vaitheeswaran, which literally means the "Lord Doctor" who can cure all diseases. Thaiyalnaayaki is seen carrying the "Sanjeevi Thailam", the medicinal oil for all illness.


Angaraka or Mangal (Planet Mars) worship is of great importance here and this is the uniqueness of this temple. Also known as Sevvai or Chevvai, the bronze image of Angaraka is placed in this shrine. This is taken out in procession on a goat mount every Tuesday, as Tuesday is considered as an auspicious day to worship Sevvai. 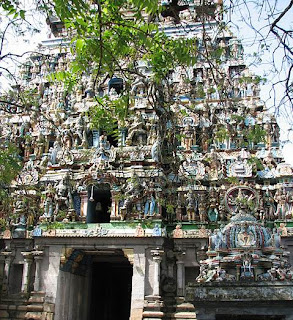 Lord Muruga is worshipped here as Selvamuthukumaraswamy (Selva Muthukumara Swamy). The temple also has a shrine dedicated to Lord Dhanvantari or Dhanwantari, an avatar of Lord Vishnu and the God of Ayurvedic medicine. Another important feature of the temple is the shrine dedicated to Jvaraharesvara (Lord of Fevers). There are around eighteen theerthams (holy tanks) seen here, out of which the Siddhamirtham tank is of most important one. The nectar with which the Sidhas worshipped Lord Shiva is said to have flown into this theertham.

Pullirukkuvelur (Pul - Irukku - Vel – Ur) obtained its name as Jatayu (Pull), Rig Veda (Irukku), Skanda (Vel) and Surya (Ur) are said to have worshipped Shiva here. Vaitheeswaran Koil has several mandapams and four rajagopurams and a significant feature in the temple construction is that the western tower allows the rays of the Sun to fall on the Shivalingam (Shiva Linga) for a few days every year. Inscriptions from the period of Vikrama Chola (12th century CE), the Nayakas (16th century CE) and the Mahrathas (18th century) are seen here. The temple is situated on the northern side of the Cauvery River.


The term Vaitheeswaran means ‘Lord Doctor’ in Tamil. Legend has it that Angaraka was suffering from leprosy and was cured by Lord Vaidhyanathaswamy. Hence, it is believed that a bath in the holy waters of the Siddhamirtham tank will cure all diseases. It is also said that Lord Ram and his brother Lakshman did the rituals for Jatayu here (Jatayu is the divine bird mentioned in the Hindu epic Ramayana). As such a pond is found here called Jatayu Kundam. Another importance of the temple is that the Saptarshi or Saptarishi (Sanskrit word which means "Seven Sages") have worshipped Lord Shiva here.

The ashes here, referred as Thiruchandu Urundai, is supposed to cure all the diseases. It is prepared from Homa Kundam. Another medicine is Chandan (sandalwood powder) with Saffron.

As Sevvai is attired in red colour, he is offered with Thoor dhal and red arali flowers during Poojas. Besides, Milagu (Pepper) and Salt with Jaggery are offered in the Siddhamritam to get rid of diseases. Offerings of unrefined sugar are also placed here.

Tuesdays are preferred for the worship of Angaraka. If one observes the fast on Tuesday for 21 times, the unlucky influence of Mangal (Tuesday) can be got relieved. Generally, six worship services are offered daily. Kartikai (Karthigai) is celebrated in a great manner. The annual Brahmotsavam is celebrated during the Tamil months of Pankuni and Thai with much religious fervor.

Vaitheeswaran Kovil is opened from 7 AM to 12.00 PM and 4 PM to 8.30 PM daily. The opening and closing timings may change during special pujas and festive occasions.

How to reach Vaitheeswaran Temple

Vaitheeswaran Kovil is 24 km from Chidambaram, 50 km from Kumbakonam, and 110 km from Thanjavur, in Thanjavur District of Tamil Nadu. Kumbakonam railway station is the nearest railhead. The Mysore Express train passes through Mayiladuthurai from Mysore via Bangalore, Salem, Erode, Trichy, Tanjore and Kumbakonam.

Nadi Jyotisa or Nadi astrology is a popular form Hindu Vedic astrology practiced here. It is believed that Hindu sages in ancient times have written down the past, present, and future lives of all human being in Nadi Grantha or Palm Leaf Manuscripts. If you believe in astrology you can try Nadi Jyotisha near Vaitheeswaran Kovil.