Lord Subramanya deity is worshipped at Thiruchendur temple as Senthilandavan, Senthilkumaran. Situated near the sea, Thiruchendur Muruga Temple, sometimes referred as Tiruchendur Seashore Temple, is splashed by the waves from the Gulf of Mannar at its eastern perimeter wall. 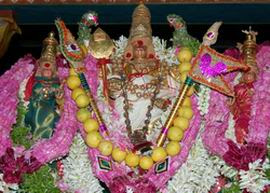 
Built about 300 years ago by Thesigamoorthy Swamigal of Thiruvaduthurai Adeenam, this Subrahmanya Swami Devasthanam is located near Vira Magendragiri Hills. Usually, the Raja Gopuram is seen in the eastern side of the temples in Tamilnadu. But in Arulmigu Subramaniaswamy Temple, Tiruchendur, it is seen in the western side. Western tower called as Mela Gopuram is 130 ft high and has nine storeys with nine Kalasams at the top of the Gopuram, representing the 9 tiers. The main entrance to the temple is facing south. The Shanmugha Vilasa Mandapam is in the front of the main temple.


A small temple for Lord Vinayaga called Tundugai Vinayagar Temple is located near the Murugan temple. It is the usual practice of the devotees to first worship this Vinayagar and then Lord Murugan. There are three prakarams (corridors which surround the sanctum sanctorum) in the temple. Siddhi Vinayaga Peruman Temple is found in the first prakaram. Moving towards west one can see 108 SivaLingas which are called 108 Mahadevars. There is also a shrine dedicated to the author of Tiruppugazh, Arunagirinathar. On turning to north, a tall sized Vallapa Vinayagar facing west is seen. Going to the north end, on the east is the Perumal Sannidhi. There is also a Santhanasala rock where devotees can worship Lord Ranganathar in a lying posture and Goddess Gajalakshmi (one of the 8 forms of Goddess Lakshmi) by his side. The copper Kodi Maram (Holy Flag mast) and Kalyana Vinayagar shrine are found at the southern side.


Vira Marthandar and Virakesari idols are seen at the entrance of second prakaram on both sides. The Kumaravidanga Peruman deity faces east at the entrance. Moving towards the west is the Lord Dakshina Murti temple and southwest corner is the sannidhi of Goddess Valliammai. The divine bedroom called Palli arai is found in that sannidhi. The Yaga Salai Mandapam is next to it where Yaga Pujas are done during the Skanda Shasti Festival. Lord Balasubramanian, a replica of Lord Murugan of the sanctum sanctorum, is seen facing the Yaga Salai. 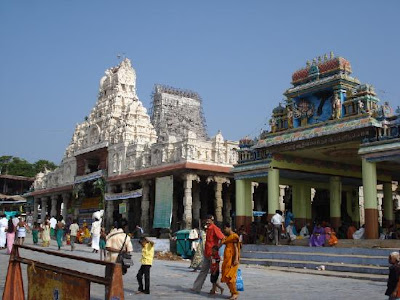 
In the northwest corner there is a sannidhi for Goddess Deivanai. Other shrines found in this prakaram are Lord Sankara Narayanar, Lord Kasi Viswanathar, Vadhapuriswarar, Vedhapuriswarar, Ekambara Nathar, Mayuranathar who is facing north and Lord Chandeswarar facing south. There are also sannidhis for Lord Nataraja and Lord Baihravar. Lord Saneeswara is found facing south. Golden Kodi Maram is seen on the south.

On coming to the inner chamber (Maha Mandabam), the statues of Goddess Parvathi Devi and Kariya Manickavinayagar are found facing east. Lord Virabahu and Vira Mahendrar are found at the entrance of sanctum sanctorum on both sides. It is said that after defeating the demon, Soorapadma, Lord Murugan worshipped the Pancha Lingas (Five Sivalingas) with flowers at this spot and looked at the Devas.

Lord Muruga is seen in this divine posture in the sanctum sanctorum. He is carved in black granite. The Pancha Lingas that Lord Muruga worshipped are seen behind him. On moving towards east is Lord Jayanti Nathar and the Shanmugar is seen facing south.

Devotees endure severe fast and take Kavadi, Palkudam and offer Abishekam to fulfill their vows. Besides, Golden Chariot procession, Chandana Labanam, Dharabhishegam and Dharahomam are also performed by the worshippers.

How to reach Thiruchendur Murugan Temple

Arulmigu Subramaniaswamy Temple, Thiruchendur is located about 60 km from Tirunelveli (Thirunelveli), 40 km from Tuticorin (Thoothukudi) and 80 km from Kanyakumari. Tiruchendur Bus Station, operated by Tamil Nadu State Transport Corporation (TNSTC), is the nearest main bus station and is well connected to other major cities and towns including Chennai, Madurai, Tirunelveli, Trivandrum and Kanyakumari.

Nearby Tourist Attractions in Thiruchendur

The ancient Ayyanar Temple at Melaputhukudi village (10 km), Kudirai Mozhitheri Spring (12 km), and Hare Island (Thoothukudi or Tuticorin) are the major tourist attractions near Thiruchendur. Another major tourist attraction is the Vallanadu Wildlife Sanctuary or Vallanadu Blackbuck Sanctuary located between Thirunelveli - Thoothukudi Main Road, which is famous for the protected species Blackbuck Antelope and also houses a wide range of animals, birds, and other wild creatures. Mayura Thottam, 22 km north-west of Thoothukudi is a great tourist spot for birds watchers. Make sure to get prior permission from the DFO, Tirunelveli Division, Kokirakulam, before visiting the Vallanadu Wildlife Sanctuary.