Posted by Abhilash MS
Dhyanalinga Temple is a Yogic Temple located at the foothills of the Velliangiri Mountains, around 30 km west of Coimbatore in Tamil Nadu, India. Also known as Dhyanalinga Yogic Temple, the temple is the first of its kind and is renowned for meditation in a pleasant atmosphere. Dhyanalinga Temple is built by a yogi, Sadhguru Jaggi Vasudev, and it is constructed in such a way it can last more than 5000 years.


The architectural style of the Dhyana Linga Temple is different from other traditional Hindu temples in India and is revered using prana prathista. There is a huge ellipsoidal dome which covers the sanctum sanctorum. A unique feature is that the dome was erected using bricks and mud mortar stabilized with lime, sand, alum and herbal additives, without any cement, steel or concrete. 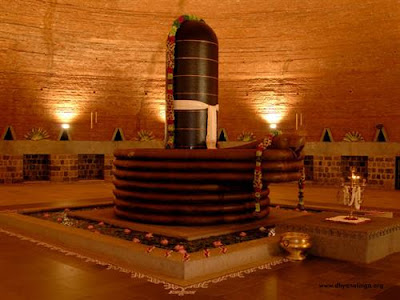 Dhyana, in Sanskrit, means meditation, and Linga means, the form. This Dhyanalinga is the largest mercury based live linga in the world and the lingam is made of high density black granite. The dome is a set on a circular stone granite wall with a ring of stone lintels. The dome towers from a seven-coiled holder called the avudaiyar. A water body called jalaseema surrounds the Linga. It creates a cooling effect on the Linga, and it seems as if the Dhyanalinga is floating on water. As the Linga and the avudaiyar are wound up with the qualities of the seven chakras; the Linga has seven copper rings and the Avudaiyar is in the form of a seven-coiled snake.

Dhyanalinga Yogic Temple has twenty-eight ventilators, arranged in the shape of the triangle, and are placed on the top of the lintel beams. These ventilators at the base of the dome provide light and ventilation. A gold plated Linga-shaped copper dome covers the central opening. The inner walls are fixed with twenty-eight energy cubicles called the 'aura cells'. These cubicles afford space for people to meditate, facing the Dhyanalinga. At the back of the dome is the huge Trimurthy Panel which represents the three fundamental states of human growth, namely, tamas, rajas, and satva, signifying the three aspects of Lord Shiva - Hara, Rudra, and Sadashiva. The idol of Linga Bhairavi, the feminine form of a linga, is located at the southwest corner of the complex.

The holy tank called Theerthakund is situated at the northern end. It is consecrated with Rasalinga (mercury linga). It is said that a bath in its waters enhances spiritual interest. Other attractions of the complex are the Nandavanam (the beautiful garden), Sadhana Hall (located at the western side of the complex used for yogic practices), the adjoining Audio-visual Gallery and the Isha Gallery.

Nadha Aaradhana is an offering of sound to the Dhyanalinga which takes place twice from 11:50 a.m. to 12:10 PM and from 5:50 PM to 6:10 p.m. Nadha Aradhana is the beautiful merger of vocals, singing bowls, drums and various other instruments, performed to the Dhyanalinga.

On Amavasya (Amavasi or New Moon) and Pournami (Purnima or Full Moon) days, Ksheera (milk) is offered from 6.30 am to 12.30 pm and Jala (water) from 12.30 pm to 8.00 pm. The temple is opened for men till 01.00 am on Amavasya days, as Amavasya vibrations are favorable for them. Consequently, Pournami vibrations are beneficial for women and the temple remains open up to 1:00 a.m. for them.

This is conducted during the 14th day of every lunar month.

Maha Shivaratri Festival falls on February - March every year. The function starts with Guru Pooja at 6.00 pm in the temple and ends at 6.00 am the following morning. Annadanam is offered to all the visitors.

Dhyanalinga Yogic Temple remains open from 6 am to 8 pm on all days. It is advisable to bring an additional set of cloths if you wish to take a dip in the divine theerthakund (holy tank).

How to Reach Dhyanalinga Temple

Dhyanalinga Temple is around 30 km west of Coimbatore. Being a major industrial city in South India, Coimbatore is well connected with other major places by road, rail and air. Regular bus services are available from Coimbatore to Dhyanalinga Yogic Temple.

The nearby domestic airport is Coimbatore Peelamedu Airport (C A Coimbatore Airport), about 10 km from the Coimbatore city. Cochin International Airport is around 200 km from Dhyanalinga Temple.

Coimbatore is also a gateway to explore the God's Own Country, Kerala.