Posted by Abhilash MS
Nagula Panchami, also known as Naga Panchami or Nag Panchami, is an important Hindu festival of snakes celebrated by Hindus in most parts of India. Naga means 'serpent' and 'Panchami' is the fifth day of the fortnight (paksha) in Hindu lunar calendar. Nag Panchami festival is celebrated on the fifth day of the bright half of Shravan (July/August) month of Hindu calendar. As the Shravan month is supposed to be a rainy season, it is believed that snake bites are prevalent during this month and the snakes come out of their holes to take shelter in gardens. Therefore on the day of Naga Panchami, people visit temples and snake pits and worship the snakes.

In 2021, the date to observe Nagapanchami is on 13 August. However, as per Andhra Pradesh (Telugu), Karnataka (Kannada), Maharashtra (Marati) and Gujarat (Gujarati) calendars, the date may be a bit different than North Indian calendar.

Naga Panchami is the day which beckons the worship of nine prominent Serpent Gods, namely, 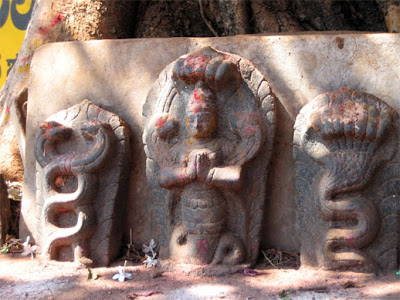 Ananta, Vasuki, Padmanabha, Sesha, Kambala, Shankhapala, Dhruthrashtra, Takshaka and Kalia. These Nagas are fed with milk and worshipped by various rituals and pujas. As a general custom, people worship the live cobras or their pictures and perform religious rites to protect themselves from snakebites. The snakes are bathed with milk and Haldi-kumkum (turmeric-vermillion powder) is sprinkled on their heads. At the end, milk and rice are offered as Naivedyam. The priest who performs the religious ritual is offered dakshina in silver or gold coins or he is complemented even with a cow. Some devotees observe a full day fast on this day and swings are put up in the villages and people enjoy themselves. During this occasion, the married girls visit their parents.

However, in South India, the procedure is a bit different. Images of snakes are made using cow dung and are kept at either side of the entrance of the houses to greet the snake god. People also worship the snake in the holes of anthills. Otherwise a five hood snake is made by mixing gandh (a fragrant pigment), halad-kumkum (turmeric powder), chandan (sandal) and keshar (saffron) and placed on a metal plate and worshipped.

Though the Nagpanchami ritual is associated with a number of legends, here is one interesting legend about Lord Krishna. The story goes like this, when Lord Krishna was playing with his cowherd friends, the ball fell into Yamuna River, in which the dreadful snake, Kalia, was living. But Krishna jumped into the river and defeated the Kalia Serpent. Thus the Lord saved the people from drinking the poisonous water by making Kalia to go away. Accordingly, Krishna came to be known as Kalia Mardan. The conquest of Lord Krishna over the Kalia snake is remembered on Nag Panchami (Nagapanchami) day.

Naga Panchami festival is celebrated differently in various parts of India. Majority of the Hindu devotees make it a point to visit temples, especially the ones dedicated to Snake gods, and offer special poojas to appease Nagas.