Posted by Abhilash MS
Navratri Festival or Navaratri Festival is one of the most important Hindu festivals of India celebrated with great religious fervor throughout India. Navratri means “Nine Nights in Sanskrit”; Nava meaning Nine and Ratri meaning nights. The nine forms of Goddess Shakti are worshipped during these nine nights and ten days. Each of the three days is devoted to worship of Goddess Durga - the Goddess of courage, Goddess Lakshmi - the Goddess of Wealth and Goddess Saraswati - the Goddess of Knowledge. 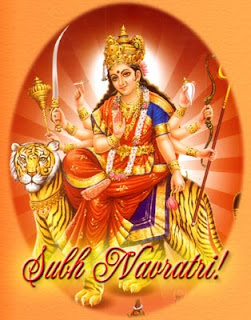 This year, the nine-day long Navratri Festival 2021 begins 7 October. Mahanavami / Ayudha Puja is on 14 October and Dussehra (Dasara) / Vijayadasami is celebrated on 15 October. Vidyarambham in Kerala is on 15 October 2021.

Though there are five Navaratris devoted to Shakti, only three are in vogue. They are:


Sharad Navratri - Sharad Navaratri is the most important of the Navratris and is called as Navratri or Maha Navratri (the Great Navratri). Observed during the beginning of winter (September - October), this festival celebrates the killing of the demon, Mahishasura, by the Goddess Durga.


Ashada Navratri – Ashada Navaratri is significant for the devotees of Goddess Varahi, this is celebrated in July-August. This Navaratri is called Guhya Navaratri in Himachal Pradesh. Varahi is one of the saptha mathrukas (seven mothers) who helped the Goddess Shakti in her fight against the demons, Shumbha and Nishumbha.

The most popular legend associated with Navaratri is the slaying of the demon king, Mahishasura, by Goddess Durga.


According to legends, Mahishasura was a powerful demon king who obtained a boon from the almighty that his death should be at the hands of a woman and by no other human being or any form of living being. His boon was granted and consequently he started doing violence on all human beings on the earth.

The first three days of Navratri are devoted to the worship of Goddess Durga. Each day is dedicated to her appearances, namely Kumari, Parvati and Kali.

In some places, there is a custom of planting barley seeds in a small bed of mud on the first day of puja. After the puja, the shoots when grown are distributed.

The fourth, fifth and sixth days of Navratri are dedicated to Goddess Lakshmi, the Goddess of Wealth and Prosperity.

The seventh day is dedicated to Goddess Saraswati. A yagna is also performed during the day.

The eighth or ninth day is celebrated as Ayudha Pooja by commercial organizations, business houses, shops and establishments. Machines, equipments and tools that are used in the organization are cleaned and smeared with sandalwood paste (Chandanam) and vermilion (KumKum) and adorned with flowers.

During the eighth day, prayers are offered to Goddess Saraswathi. People place books of children and musical instruments before the goddess. Pujas are performed on the day.

The ninth day of Navratri celebrations is also known as Mahanavami or Maha Navami. Kanya puja is performed during the day. Nine young girls, who have not yet reached the stage of puberty, are worshipped as these nine girls are said to symbolize the nine forms of Goddess Durga. The feet of the girls are washed and the girls are offered food and a set of new clothes.

During the Sharad Navaratri, that is the September - October Navratri celebrations, the tenth day is celebrated as Dussehra.