Posted by Abhilash MS
According to Padma Purana, the female energy of Lord Vishnu killed demon Muran in the form of a damsel named “Ekadashi” to protect Devas. This occurred during the month of Marghazhi (Margashira or Margashirsha) (mid December – mid January). Hence anyone who worships Lord Vishnu on Ekadasi day would reach Vaikunth.

Hindu Puranas say that it was on this day that the churning of the ocean occurred and the Amrit (nectar of immortality) emerged out of the ocean was distributed to the Gods. Hindus believe that those who die on this day are freed from the cycle of birth and death and that they would directly reach Vaikunta.

Another importance of Vaikunta Ekadasi is that the Bhagavad Gita Upadesh of Lord Krishna to Arjuna during Kurukshetra War is said to have done on this day.

How to observe Vaikunta Ekadasi Fasting

Though there are 24 Ekadashis in a year, according to Vishnu Purana (the primary text among 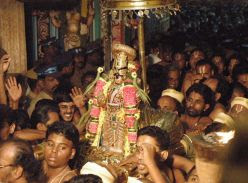 the 18 Puranas), observing fast on Vaikuntha Ekadasi day offers equal benefits of observing all the other 23 Ekadashis during the year. Devotees observe a complete fast on the day, awake during the whole night and offer prayers such as Vishnu Ashtotharam and Vishnu Sahasranamam Stotra of Lord Vishnu. However, if it is not possible to fast completely, one can consume fruits and milk. Food made from rice is to be avoided during the day. The fast is to be broken on the following day (Dwadashi). Read more about Ekadasi Vrat Here

Opening of Gateway of Salvation (Swarga Vasal or Swarga Vathil)

One of the important rituals associated with Vaikunta Ekadasi is the opening of Gateway of salvation in the early morning at Lord Vishnu Temples in India. The gateway is usually located on the northern side of the temples. Vaikunta Ekadasi is celebrated with much religious importance in Srirangam Sri Ranganatha Swamy Temple, Tirupati Lord Venkateshwara Temple, Sree Padmanabhaswamy Temple at Thiruvananthapuram, and almost all temples of Mahavishnu.