Hampi, the erstwhile capital of the Vijayanagara Empire, lies on the southern banks of the Tungabhadra River, to the north of the Hemakuta Hill. The ancient ruins of Vijayanagara Empire at Hampi city is listed by UNESCO World Heritage Site as “the Group of Monuments at Hampi”. Read about Hampi Festival in January here 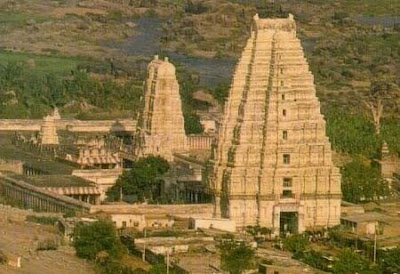 
The idol of Lord Virupaksha is seen in the form of a Linga inside the sanctum. The sub shrines of Goddess Pampa and Goddess Bhuvaneswari, consorts of Lord Shiva, are found towards the north of the main shrine. The shrine for Goddess Bhuvaneshwari is noted for its beautifully worked door-frame, pillars and ceiling panels. The shrine of Pataleswara, a form of Lord Shiva, is seen in an underground chamber. There is also a separate shrine for Navagrahas and for Vidyaranya, the holy founder of Vijayanagar in this temple. 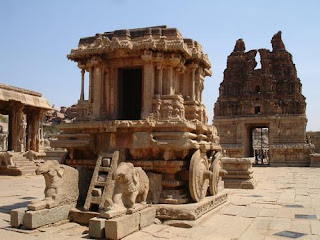 Many shrines and pillars dating back to the 12th century are found in the inner prakaram. The Suryanarayana shrine has a southern form of the deity and the Mukhi Narasimha shrine nearby is a fine specimen of Chalukyan sculpture. Adjacent to this is the Tarakesvara shrine with the figure of Lord Shiva with Goddess Parvati seated on his lap. In the south-west corner is a Goddess Saraswathi shrine with a small black stone image of a two-armed seated goddess playing on a Veena (Veena, also spelled Vina, is a plucked stringed musical instrument widely used in Carnatic Indian classical music). A black stone figure of the six-armed Mahishamardini is in the western corridor.

Manmantha Tank is the holy pond of the temple. The narrow channel of river Tungabhadra flows along the terrace of the temple. It moves down to the temple kitchen and finally flows through the outer court.

Held during December, this festival marks the ceremonial betrothal and the marriage of Lord Virupaksha and Goddess Pampa.

Deepavali or Diwali and Maha Shivaratri are other important Hindu festivals celebrated at the temple with great religious importance.

Hampi being a historic city features a wide range of tourist attractions including ancient temples, forts, historic monuments, and even hills and mountains. Hampi is believed to be the ancient Kishkinda - the monkey kingdom referred the Hindu epic ‘Ramayana’. 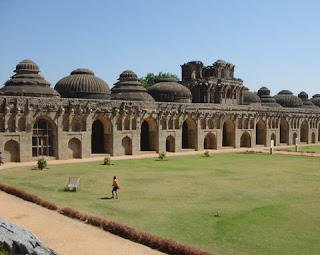 Other places of tourist interest in Hampi include the Sugriva's Cave, Matanga Hill, Hemakuta Hill, and the Hampi Archeological Museum.

Tourist visiting Hampi can take a short tour to the nearby tourist places such as the Tungabhadra Dam at Hospet, Chitradurga Fort (Kallina Kote), Pampapati Aalayam, Raghunath Temple, the ancient temple of Anantapadmanabha at Hospet, Ramaswamy Aalayam, Vijaya Vittalaswamy Aalayam, and the Local Antiquities Museum at Chitradurga.