Posted by Abhilash MS
Sri Ranganathaswamy Temple in Srirangam is located about 7 km from Trichy (Tiruchirapalli) in Tamil Nadu, India. Srirangam Ranganathaswamy Temple is the first and foremost among the 108 Divya Desams, the holy abodes of Lord Vishnu, and also considered as one among the eight Svayam Vyakta Ksetras (self-manifested shrines) of Lord Vishnu. According to Sri Vaishnava philosophy, the eight Svayam Vyakta Ksetras of Lord Vishnu are Srirangam Temple, Srimushnam, Venkatadri, Saligram, Naimisaranyam, Totadri, Pushakara and Badrinath Temple.

Sree Ranganathaswamy Temple is also known by the names Thiruvaranga Tirupati, Periyakoil, Bhoologa Vaikundam and Bhogamandabam. Sri Ranganathar Temple at Srirangam lies on an island, enclosed by the Kaveri River and Kollidam River. Lord Vishnu is enshrined as Ranganatha - the reclining position of Lord Vishnu over the Shesha Nag (serpent Adisesha). It is believed that this is the form in which Lord Mahavishnu is open to listening to all of his devotee's woes, and blesses them. Lord Ranganatha or Ranganathar is also called by various names such as Nam-Perumal and Azhagiya Manavalan by the devotees. 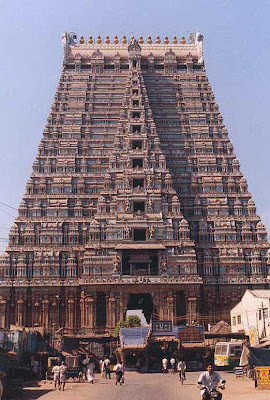 Built between 11th and 17th century, Sri Ranganatha Swamy Temple occupies an area of 156 acres and is regarded as the largest functioning Hindu temple in the world. Please note that Angkor Wat Temple in Cambodia is listed as the largest non-functioning Hindu temple in the world. Srirangam Vishnu Temple, renowned for its architectural grandeur, features 7 concentric walls, termed as prakarams and these walls are enclosed by 21 Gopurams. The 72m high 13 -tiered gopuram called Rajagopuram stands majestically above all other towers and is one of the tallest towers in Asia. It is said that the shore of Sri Lanka can be seen from the top of this Rajagopuram. The tower was built in 1987 and the other 20 gopurams were built between the 14th and 17th centuries.

Another awesome feature of Sri Ranganathaswamy Temple is the Hall of 1000 Pillars which has beautifully carved stone pillars. The main sanctum which houses Lord Ranganatha has a golden Ranga Vimana and is set at the center of the inner most prakaram. Ranganatha, who is seen reclining on the serpent Adisesha, is flanked by his consorts Bhoodevi and Sridevi. The Seshagirirayar Mandapam, with exquisitely carved pillars and the 17th century Krishnavenugopala Temple adorned with sculptures dating back to Vijayanagara period are other attractions. A small temple museum exhibits fine sculptures. The complex also has shrines for the different forms of Lord Vishnu such as Sudarshana Chakra, Narasimha, Rama, Hayagreeva, Gopala Krishna. There is a separate shrine for Goddess Ranganayaki and other shrines for the major saints in the Vaishnava tradition, including Ramanuja.

Devotees please note that the timings of darshan are subject to change on Festival Days.

Regular bus services are available to most parts of Tamilnadu from Srirangam.