Posted by Abhilash MS
Ambalappuzha Sree Krishna Temple is a famous Hindu Lord Krishna temple situated 14 km south of Alappuzha in Kerala, India. Ambalapuzha Temple was built by the erstwhile ruler of Chembakasserry Sree Pooradam Thirunal Devanarayanan Thampuran during 15th – 17th AD. It is believed that the idol of Sree Krishna of Guruvayoor Temple was brought here for safekeeping during the raids of Tipu Sultan in 1789.
The temple is also famous for its unique prasadam, the delicious Ambalapuzha Palpayasam – a sweet porridge made of rice, milk, and sugar. Ambalapuzha Sri Krishna Temple is often refereed as Dwaraka of South.

Ambalappuzha Sri Krishna Temple enshrines Lord Krishna in the form of Parthasarathy – an aspect of Lord Krishna taken during the Mahabharata war. Lord Krishna is popularly known here as Unnikannan (child Krishna). The idol of Krishna here is carved out of black granite stone holding a whip in His right hand and a conch in the left. 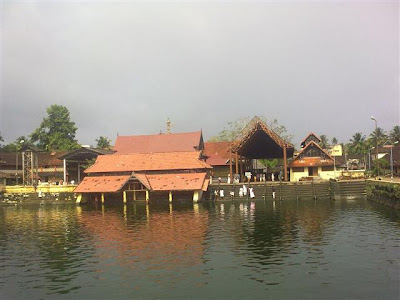 It is believed that one day Pooradam Thirunal Thampuran and Saint Vilwamangalam Swamiyar was traveling along the backwaters and heard melodious sound from a flute. Vilwamangalam Swamiyar, an ardent devotee of Krishna, had a vision of Lord Krishna playing flute on a Peepul tree. Feeling the presence of God, Thampuran decided to build a temple at this place.

Ambalapuzha Arattu is the main festival celebrated at the temple for 10 days during the Malayalam month of Meenam (March – April). An important feature of the temple festival is the Velakali - a unique martial dance form performed during temple festivals.

Ambalapuzha Moolakazhcha is another important ritual held in the temple during the Malayalam month of Mithunam on the Moolam asterism (Mool Nakshatra).

Champakulam Boat Race is held on the Prathista day (idol installation day) of Ambalapuzha Sreekrishnan idol in the temple.

The temple is associated with the birth of famous performing art form of Kerala – Ottamthullal. It is believed that legendary Malayalam poet Kalakkaththu Kunchan Nambiar gave birth to this unique art form in the Ambalappuzha Temple premises. The Mizhavu (a big copper drum used as a percussion instrument in performing arts) used by Kunjan Nambiar is still preserved in an enclosure in the temple. 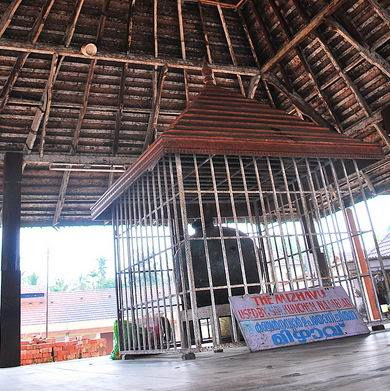 Thunjathu Ezhuthachan, who is considered as the father of Malayalam language, is believed to have penned Adhyatma Ramayanam Kilippattu (a translation of the Ramayana and Mahabharatham or Mahabharatha ) in the temple.

Ambalapuzha Temple is situated around located 14 km from Alappuzha (Alleppey)    . Frequent buses are available on the Alappuzha - Ambalapuzha route. Ambalapuzha is about 60 km from Ernakulam and 120 km from Thiruvananthapuram, the state capital.

Cochin International Airport is the nearest airport, 64 km away.