Posted by Abhilash MS
Kurma Avatar is the second among the 10 Dashavatara of Lord Vishnu. Kurma avatar belongs to the Satya Yuga and in this avatara Mahavishnu incarnated as a giant turtle to save the earth from destruction. Kurma Avatar is explained mainly in the Bhagavad Purana, Agni Purana and Ramayana. Kurma Purana, one of the major eighteen Puranas, is said to have been directly stated by Lord Vishnu to the sage Narada, and it contains the details about the Kurma avatar (Koorm Avatar). Kurma means tortoise in Sanskrit and in this Avatar, Lord Vishnu helped the Devas to get the Amruta during the Samudra Manthan or churning of the ocean.

The Kurma avatar of Lord Vishnu is depicted in the form of a half-man and half-tortoise. Though his color is black, he is sometimes depicted as golden in color. Two of his hands carry the conch-shell, and the Chakra (a discus), and the other two bear the Varada and abhaya mudras. He wears the crown, Kirita-mukuta on his head. Kurma is portrayed with his consorts Sri and Bhumi, or with Sri and the Pusti tree. 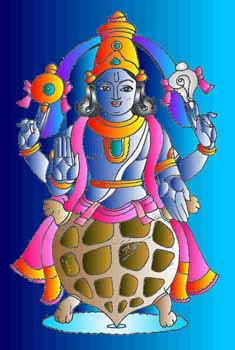 Temples of Kurma Avatar of Vishnu

Sri Kurmam Kurmanatha Temple, located at Sri Kurmam Village near Srikakulam, Andhra Pradesh, is the only temple dedicated to Kurma in India. Paintings of Kurma avatar can be seen in many Lord Krishna temples and Lord Vishnu Temples.

According to Kurma Purana, the emergence Kurma Avatar was due to the negligence of Indra, the King of the Gods in the Vedas. Once, Durvasa, an ancient sage, gave a garland of flowers to Indra who placed it upon his elephant Airavata. The elephant threw it on the ground and crushed it. Durvasa, who was bad-tempered, cursed Lord Indra and all the other devas that they would lose their strength. As devas grew weaker, the asuras, a group of malicious deities in the Hindu pantheon, tried to conquer them. Due to this, a war followed, which continued for many years. Devas fought bravely, but could not win over the asuras. So they pleaded Lord Vishnu to help them.

Lord Vishnu asked the devas to pour medicinal herbs into the ocean of milk, and to use Mount Mandara as a churning stick and mix up the elixir of immortality. But, they could not pull up the mountain. As advised by Vishnu, the gods and asuras made a deal to churn the milk ocean jointly. They pulled the Mount Mandara and used it as a churning stick, wrapping the serpent Vasuki around it. Vasuki was used as the churning rope by pulling first one way and then the other. While the churning was going on, Mandara began to sink into the mud at the bottom of the milk ocean. To provide support for the mountain not to sink any further, Vishnu took the form of Kurma, and supported the mountain on his broad back.