12 Types of Kalsarpa Yoga in Astrology

Posted by Abhilash MS
The person who has Kala Sarpa Yoga in his horoscope will suffer from various problems in life. Hence Kala Sarpa Yogam or Kalsarpa Yoga is regarded as a deadly yoga in Hindu astrology. Kala Sarpa Yoga is formed when all the planets are hemmed between the Navagraha Planets Lord Rahu and Lord Ketu in one’s horoscope. There are mainly 12 types of Kala Sarpa Yoga. Below are the details of the twelve Kaal Sarpa Yogas and the positives and negatives of the yogas.

This yoga is created when Rahu is in the 1st house and Ketu is in the 7th house and rest of the planets is left to the axis. The person undergoes physical and mental problems and gets in to the problems relating to legal and government matters. The positive part of this yoga is that the person influenced by this will be brave, courageous, confident and broad minded. It is very bad for marital life and natives with this yoga have a late marriage.

This yog is formed when Rahu is in the 2nd house and Ketu in the 8th house. The native bears huge financial loss. He does not have a good understanding with the society and his family life also is full of struggle and conflicts.

When 3rd house is occupied by Rahu and 9th by Ketu and the rest of the planets are situated to the left of the rahu-ketu axis then this yog is born. The individual having this yog is more inclined to spirituality but this brings problems in job and business. The impact of the planets can cause blood pressure, sudden death and loss of relatives.

Shankapal Kalasarpa yog takes place when Rahu and Ketu are placed in the 4th and 10th position. People having this yog will lack good friends and enjoyments. Problems arise in job. It can cause bad impact on mother and the individual is deprived of father’s affection and in worst condition death can be caused in a foreign location. 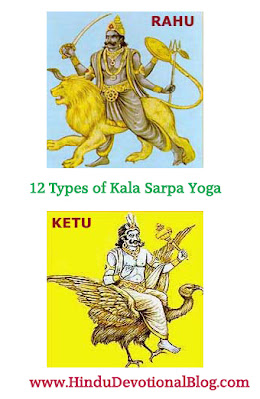 If Rahu stands in the 5th Ketu in the 11th house then this yog is formed. Hindrance in education, failure in love affair, illness for wife and children and delay in cure of illness are some of the impacts of this yog.

The native person will have Rahu in the 6th house and Ketu in 12th house in his birth chart. The person faces difficulties because of his maternal uncle and also suffers from decrease in monetary possession and also face disappointments in his life. The positive influence of this yoga is that it makes the native a spiritual person and has the power to confer power and political success.

This yoga is formed when Rahu is in the 7th house and Ketu is in the 1st house. This position is opposite to Anant Kalsarpa Yoga. The person faces difficulties in married life and also faces health problems. Partnership is not advisable for these persons and can lose wealth by way of women and gambling.

When Rahu is in the 8th house and Ketu is in the 2nd house this yoga is formed. Good academic performance and an influential speech that is loved by all is a positive part of this yoga. The negative impact of this yoga is that the person will be short tempered and creates friendship with anti social elements. The person will also face financial difficulty as he does not get paternal wealth.

This yoga is created when Rahu is in the 10th house and Ketu in the 4th house. This yoga raises conflicts in the family and makes the individual wicked and dissatisfied with this job. If the yoga works in a positive way then it provides with the highest form of political power.

This yoga is formed when Rahu is in the 11th house and Ketu is in the 5th house. The native faces difficulties related to children and his respect and honour in society may decline. The native has to travel frequently and is never fixed at a place. As a positive part he will gain through different means and he lives life like a king if other planets are positioned in good houses.

In this yoga Rahu occupies the 12th house and Ketu occupies 6th house. They suffer health related problems and sleepless nights. They have enemies who don’t show it straightly but conspire behind his back. The native faces problems related to litigation and suffers defeat and misfortune. The only positive side of this yoga is that the person becomes famous after his death.

The other yogas include Kala Amrita Yoga where all seven planets in between Ketu-Rahu axis is said to give progress in spiritual enlightenment and they have a peaceful mind and are not affected by family bondages or materialistic comforts and Partial Kalasarpa Yoga where only one planet comes out of Rahu-Ketu axis and does not harm the person too much. But there is a lot of suffering during the dasha of this planet lying outside Rahu-Ketu axis.