Posted by Abhilash MS
Lord Agni or the Fire God is an important Vedic deity in Hinduism, who is regarded as the acceptor of all sacrifices. In Rigveda, Agni is treated as supreme God next to Varuna and Indra. The light emitted by the Agni Deva represents knowledge and the path leading to truth. Agni is depicted as the Vedic God of Fire with two heads, one stands as a symbol of life and the other for immortality.

According to Hindu scriptures, Agni is the eldest son of Lord Brahma. Goddess Svaha is the wife of Lord Agni. Vayu Purana describes about the 3 sons of Agni – Pavaka, Pavamana and Suchi. The three sons of Agnideva represent the three aspects of Fire God – Suchi represents the “solar fire”, Pavaka represents the “electric fire”, and Pavamana the “fire produced by friction”. 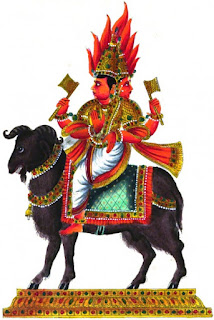 The first word of the first hymn of Rig Veda starts with the name “Agni”. Rigveda represents Lord Agni as the God, the High Priest, lavishes of wealth, and minister of sacrifice.