Posted by Abhilash MS
Lord Krishna is the ninth avatar of Lord Vishnu’s Dasavatara. Sree Krishna is the  most admired and the most popular of all Indian divinities. Worshipped across many traditions of Hinduism in various views, the Lord is traditionally credited as the author of the Bhagavad Gita. Born in the Dwapara Yuga, Krishna is regarded as an embodiment of divine love and joy. The leader of all forms of knowledge, Krishna participated in the events of Mahabharatha. Krishna's legends are described in various scriptures such as the Mahabharata, the Harivamsa, the Shrimad Bhagavata Purana and the Vishnu Purana.

In Sanskrit, the word Krishna is used as a name to describe a person with dark skin. Krishna also denotes "all-attractive one". Krishna is the 57th name in the Vishnu Sahasranama. According to Adi Sankara, Krishna means blissful. His skin color may be depicted as black or dark in some representations. However, in murtis, Krishna is usually shown with blue skin. He is usually seen wearing a yellow silk dhoti and peacock feather crown. 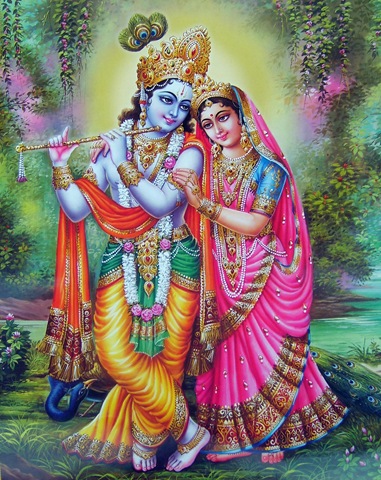 Other common depictions display him as a little boy (Unni Kannan), or as a young man in a relaxed pose, playing the flute. In this style, he stands with one leg bent in front of the other and raises a flute to his lips, known as Tribhangi Mudra, along with cows, pointing out his position as the divine herdsman, Govinda, or with the gopis.

In temples, Lord Krishna is represented as a man standing in an upright, formal pose. He may be alone, or associated with his brother Balarama and sister Subhadra, or his main queens Rukmini and Satyabhama.

Lord Krishna is also depicted and worshipped as a small child (Bala Krishna, the child Krishna), crawling on his hands and knees or dancing, with butter or Laddu in his hand.

He is also portrayed as a youthful prince giving direction and guidance as in the Bhagavad Gita.

Krishna Janmashtami, or the birth of Lord Krishna, is observed on the Ashtami tithi, the eighth day of the dark half of the month of Bhadrapada in the Hindu calendar, on the Rohini Nakshatra. Usually, the festival falls within August - September. During the festival, devotees undergo fasting for the entire day and break it after the birth of Lord Krishna at midnight.

There are numerous Krishna Temples in India. Popular among them include