Posted by Abhilash MS
Dhyana Sloka of Lord Vishnu taken from Vishnu Sahasranamam Stora. Dhyana Slokas are Hindu mantras which help a devotee to meditate the particular God in his mind by bringing the picture described as in the Dhyana mantra. Find the lyrics of Dhyana Sloka of Mahavishnu, one of the Trinity Gods of Hindus. The English meaning of Vishnu Dhyana Sloka is provided after the lyrics.

Let that Mukunda makes us all holy,
Who wears all over his body,
Pearls made of crystal,
Who sits on the throne of garland of pearls,
Located in the sand of precious stones,
By the side of the sea of milk,
Who gets happy of the white cloud,
Sprayed of drops of nectar,
And who has the mace, the wheel and the lotus in His hands.

The lyrics and meaning is provided by PR Ramachander 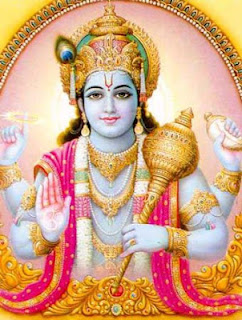