Posted by Abhilash MS
Thiruvanthipuram Hayagriva Temple is one of the famous temples of Lord Hayagreeva in India, situated 7 km from Cuddalore in Tamilnadu. Also known as Thiruvanthipuram Devanatha Perumal Temple, this 108 Divya Desams of Lord Vishnu is a twin temple enshrining the idols of Lord Hayagreevar and Devanatha Perumal Swami. The presiding deity, Mahavishnu is worshipped here as Lord Devanatha and Goddess Lakshmi as Sengamala Thayar (Hemabujavalli). Lord Hayagriva is worshipped here in Yoga Hayagriva posture - a solitary pose of divine meditation.

Thiruvanthipuram Devanatha Temple is built in traditional Dravidian style of architecture and is set in a picturesque environment in Oushadhagiri Hill surrounded by huge Aswatha trees, near the sacred River Gadilam (Garuda Nathi). References to the temple can be seen in the Divya Prabandha of the Tamil Alwars. Sri Ramanujacharya, the most venerated teacher in the philosophy of Sri Vaishnavism, lived in Thiruvanthipuram. 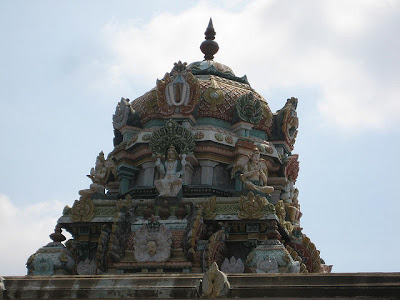 Vaikunta Ekadasi, Hayagrivar Jayanthi, and Sree Rama Navami are some of the major festivals celebrated at the temple.