Posted by Hindu Devotional Blog
Chidambaram Nataraja Temple, also known as Thillai Natarajar Temple is one of the most ancient temples in India. The temple is located in located in the temple town of Chidambaram in Cuddalore district of Tamilnadu. Chidambaram Temple is one of the Pancha Bootha temples of Lord Shiva and represents air, one of the five elements of the universe, and is known as Akasa Lingam. Lord Shiva is worshipped in the form of the cosmic dancer, Lord Natarajar. This place was previously known as Tillai. Goddess Parvati is worshipped here as Goddess Sivakami Sundari.

Chidambara Rahasiyam literally means "The Great Secret of Chidambaram". Since ancient times it is believed that Lord Shiva and Goddess Parvati are invisible present inside the shrine. Chidambara Ragasiyam is hidden by a curtain (which represents Maya) inside the temple shrine. Behind the curtain are golden Vilva (Bilwa) leaves hung to indicate Lord Shiva’s presence. 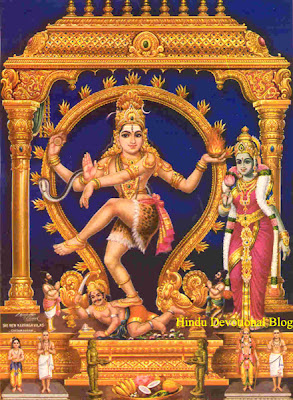 Occupying an area of 40 acres, Chidambaram Natarajar Kovil is renowned for its architectural splendor and sculptural styles. The temple has four gopurams, each in four directions. All these towers are seven-storey and are decorated by copper kalasams at the top. The eastern tower is sculpted with the 108 postures (karnams) of Bharathanatyam, the Indian dance form.

Chidambaram Temple complex also has the shrine where the Shivalingam worshipped by Saints Patanjali and Vyagrapathar are installed. This Shivlinga is believed to be the original Shivalingam of the temple and is known as the lord is known as Thirumoolattaneswarar and Goddess Umaiya Parvathi or Umaiyammai.

A unique feature of Chidambaram Nataraja Temple is that the temple houses a shrine for Lord Vishnu who is worshipped here as Govindaraja Perumal with his consort, Pundareegavalli Thaayar. Popularly known as Thillai Thiruchitrakoodam, this shrine is one of the 108 Divyadesams of Lord Vishnu.

The temple also has shrines for Goddess Sivagami, Lord Ganesha, Lord Muruga (known as Pandiya nayakan), and the 63 chief devotees of Lord Siva, named as the Arubathu Moovar.

Worship services are conducted Six Kalams (six times) daily. At each kalam, the Spadika Linga (Crystal Linga) is smeared with ghee, milk, curds, rice, sandal paste and holy ash. Then the Lord is offered with Neivedhyam, followed by the Deepa Aradhana. Kala Sandhi is conducted at 07.30 am, followed by abhishekam with milk, honey and sandal-paste to the ruby idol of Natarajar (Ratnasabhapati). Next is the Uchi Kala Pooja and the temple is closed after this, and re-opens at 05:00 pm. Sayarakshai is conducted at 06:00 pm and Ardha jamam at 09:00 pm. Following this, the sandals of the Lord are taken out from Chit Sabhai and brought in to the Palli-Arai.

Chidambaram is located on the Karaikal – Cuddalore – Chennai Highway; the town is 69 km from Pondicherry, 65 km from Karaikal and 234 km from Chennai. Frequent bus services are available from various parts of the cities.

Chidambaram is located on the Chennai – Tiruchirappalli railway line of the Southern Railways.