Posted by Hindu Devotional Blog
Jokhang Temple in Lhasa is a famous pilgrimage center for Buddhists in Tibet and China. This 7th century temple located at Barkhor, Lhasa belongs to Tibet which is now a part of China. This marvelous monument is very important as far as the tradition and history of Tibet is concerned. Jokhang Temple is now a popular religious center and has been included in the world heritage list of UNESCO.

Jokhang Temple was founded by King Songtsem Gempo and the construction was based on the architectural style of India, Nepal and Tang dynasty. The temple is a four-storey timber complex with a golden top and comprises of eight shrines. Above the main entrance of the shrine is a golden Dharma Wheel (chakra) flanked by two golden deer. The temple enshrines the statue of Jowo Shakyamuni Buddha at age 12 in the middle of the hall. 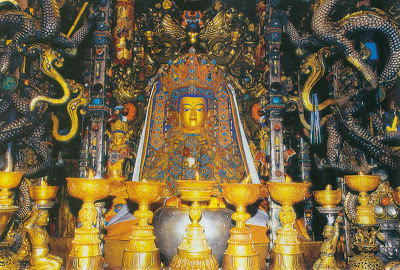 Some of the specialties of the temple construction are roof beams, sunk panels and cross beams. The wooden square blocks inserted between the top columns resemble extraordinary skills and ability of workers. The main hall of the temple represents Tibetan and Han style architecture which is featured with two storied hall with an empty pavilion, chanting hall and space for worshipping Buddha. The roof spaces of interior passage are decorated with stripes of divine animals and a wooden sculpture of sphinx. The entire temple complex can be viewed by standing on the open space of the building. Jokhang Temple has intervened in the cultural aspects and life of Tibetan natives and played certain anchor roles in the publicity of Buddhism in the country.

The origin of Jokhang Temple is very much related to Tang dynasty and King Songtsem Gempo, the founder of Jokhang Temple. He was a progressive leader of the Tibetan kingdom and did a great deal to promote Buddhism in the country. Later, kings belong to Yuan Dynasty, Ming dynasty and Qing dynasty carried out multiple renovation process in the temple and brought the glory that prevails today. The extraordinary construction has been attracting by the tourists all over the world.