Posted by Abhilash MS
Narasimha Panchamrutham Stotram Lyrics. Lord Rama had composed Sri Nrsimha Panchamruta Stotra when he visited Ahobilam Nava Narasimha Temples in Andhra Pradesh. Below is the lyrics and meaning provided by Sri PR Ramachander. Ahobalam is an important Narasimha temple located in Kurnool district of Andhra. It is believed to the place where Lord Narasimha killed the demon Hiranyakashipu and blessed Prahlada.

The glorious Rama went to Narasimha of Ahobilam,
Prostrated before him and offered prayers to the Lord of the lotus.

Protector of beings, destroyer of persons, he who is everywhere,
Lord of the universe, he who is complete, killer of Madhu, lord with universal form,
Lord having lotus on his belly, best among men, lotus eyed god,
He who lives in water, he who does not slip and Oh Lion man,
Salutations and salutations to you.

I have sought the protection of that Man lion,
Whose feet is ever worshipped by,
All devas, certainly by great experts in yoga,
Gandharwas, Vidhyadharas and Kinnaras

I have sought the protection of that Man lion,
By whose grace, one receives always without fail,
All the Vedas, essence of all sciences,
Knowledge, strength fame as well as wealth

I always salute you and you only as you are,
Brahma, Shiva, Vishnu, Narayana,
The chief of maruths, moon wind,
Fire and all the celestial principles.

I always salute you and you only as you are,
Who creates destroys and looks after,
The entire three worlds as if in a dream,
And you are the one who divides ,
Yourself in to these three forms.

The best of the Raghu clan prayed him thus,
And showered a rain of flowers on the god’s body,
And the sages and devas told Great, Great.

The is prayer sung by Lord Rama is equal to five nectars,
And the twice born who reads thid would permanently attain his heaven 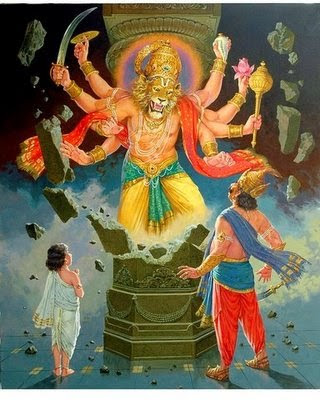