Posted by Abhilash MS
Chottanikara Makam Thozhal is an important festival celebrated at the famous Chottanikara Bhagavathy Temple in Kerala. The ritual is celebrated during the annual temple festival which falls in the month of Kumbham (February – March).
It is believed that the Goddess gave darshan on Magha nakshatra to Vilwamangalam Swamiyar in her full attire with glittering clothes and ornaments with four arms in Abhayam, Shank, Chakram and Varam mudras. And hence having a darsan on the Makam nakshatra in Kumbha masam is of great importance to devotees.  In 2022, Chottanikara Makam Thozhal is on February 17. 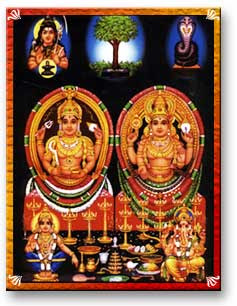 Makom Darsanam of Chottanikara Amma between 2 pm and 8 pm is considered to be most effectual for Mangalyam (long married life) and for getting best marriage for girls.

Chottanikkara Bhagawati Temple is located near Ernakulam in Kerala, India.