Posted by Abhilash MS
The annual Guruvayur Festival or Guruvayur Ulsavam is celebrated in the Malayalam month of Kumbha (February - March) at the Guruvayur Sree Krishna Temple at Guruvayoor, Kerala. Guruvayur Temple is one of the one of the most renowned and oldest temples in Kerala. The 10 days Guruvayur Arattu festival starts with Kodiyettam (hoisting of the temple flag atop the flagstaff) on the Punartham Nakshatra (Pushya Star).

The festival starts with unique Anayottam - the Elephant Race 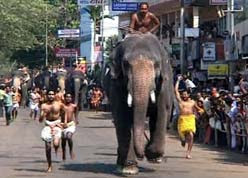 One the unique feature of Guruvayoor Ulsavam is that the first day of Guruvayur Festival starts with Anayottam (elephant race). The winning elephant is given the honour of carrying the Thidambu (the idol of Guruvayoorappan) on all special occasion for one year. Devotees can watch elephant processions in the morning, afternoon and night for the next six days of the festival. Guruvayur Sree Krishna Temple will host several cultural programs such as Chakkyar Koothu and Krishnanattom at the Koothambalam (special temple theater) during the festival days. Krishnanattom, referred as the precursor of Kathakali, a traditional Kerala dance performance which plays Lord Krishna’s life from his birth to 'Swargarohanam'. Another special feature of the festival is the `Kazhchasheeveli' for the first eight days of the festival.

On the 8th day of the Guruvayur Ulsavam, Utsavabali oblations are offered to Lord’s lieutenants. The 9th day of the festival is the Pallivetta day (the royal hunt), which starts with Sree Krishna on elephant starts hunting of wild boars - 40 to 50 people dress like boars using masks called Pannimanushams. Pallivetta represents the symbolic destruction of Kama (desire) and Krodha (anger) from the minds of the people. Pallivetta also symbolizes the victory of good over evil.

The 10th day is the Guruvayur Arattu (Guruvayoor Aarattu). The temple will be opened late after 6:00 am as the Lord would be tired after Pallivetta. All usual pujas and rituals are performed except the Usha puja. The Arattu procession starts at 6:30 pm and the Lord's idol is taken to the Rudratheertha (holy water tank) for Arattu. Thousands of devotees will also take a holy dip after Lord’s Arattu to wash off their sins. After the Aarattu, Lord’s Idol is again taken on the elephant and the elephant runs round the temple eleven times and the devotees follow the elephant with good spirit. This is another unique and thrilling feature of festival. This marks the end of the Guruvayur annual festival and the Lord returns to the sanctum sanctorum. The temple flag is lowered marking the end of the Guruvayur annual Ulsavam.

Thousands of devotees from in and around Kerala visit the temple on all festival days.

How to reach Guruvayur Temple