Posted by Abhilash MS
Sri Darbaranyeswarar Temple, also spelled Darbaraneswarar Temple, is one of the most famous Lord Shani Temples (Lord Saturn) in Tamil Nadu, India. Sree Dharbaranyeswara Swamy Temple is located at Tirunallar (Thirunallar) which is about 5 km west of Kaaraikal, on the Karaikal – Mayiladuthurai - Kumbakonam bus route, in Karaikal District, Tamilnadu.

The magnificent shrine dedicated to Saneeswarar (Lord Shani or Saneeswaran) near the inner tower known as `Kattai Gopuram'. He faces east with `Abhaya Varada Hastham' and is considered the 'Anugraha Murthi' (one who bestows good things). His idol is placed in between the presiding deities. Shani Bhagavan, one of the 9 Navagraha Planets, is reputed both as a giver and destroyer. 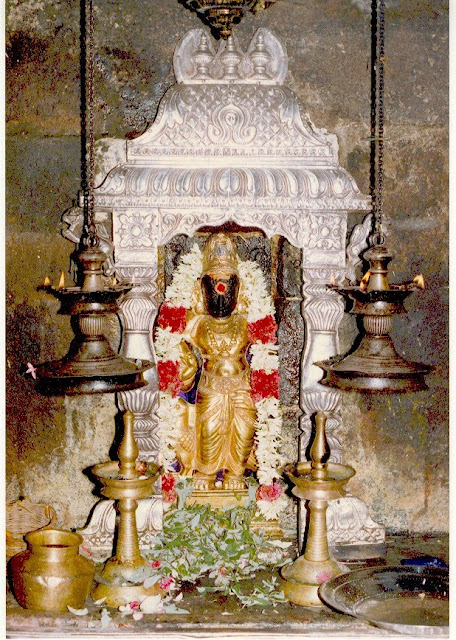 Located on the southern banks of river Cauveri, Thirunallar temple has a five-tiered Rajagopuram and faces east. Thyagarajar shrine is found at the southern entrance and in front of it is the emerald `Nakavidangar,' installed by Musukunda Chakravarthi. Its architectural features date back to the Chola period. Tirunallar is one of the 7 Saptavitanka stalams of Tyagaraja connected with the Mucukunda Chola legend. The place was originally called as Darbaranyam or the place in a forest of Kusa grass (Darbam).

Tirunallar Shani temple is associated to many myths. According to a legend, King Nala was badly affected with numerous problems due to the adverse effects of Saneeswaran. He took a holy dip at the temple tank Nala Theertham and got relieved of the evil effects.

Saneeswaran and his effects in Horoscope

When Lord Shani (Saturn) passes through the ‘Janma Rasi’ in one's birth chart, he is said to cause difficulties to a person and when he passes through the eighth house from one's Janma Rasi (Ashtamathu Sani) he casts more challenges. However, the adverse effects of Shani can be relieved through prayer and by performing puja to appease Lord Shani. Sani transits from one house to another every two-and-a-half years and this is known as ‘Sani Peyarchi’. Shani Peyarchi is one of the best known festival celebrated at Lord Darbaranyeswarar Temple and is visited by large number of people. Saneeswarar’s deity is taken in a procession around the town on this auspicious occassion.

Saneeswaran is attired in black colour and the grain associated with him is sesame. He can be offered with the flowers - vanni and blue kuvalai; and rice mixed with sesame powder.

Special poojas and abhishekams are performed on Saturdays as Saturday is considered special of Lord Saneeswara.

Apart from daily worship services which are performed five times daily, Darbaranyeswarar Shani Temple hosts a number of festivals throughout the year. On Tamil New Year's day (Tamil Puthandu), (marked by the transition of the Sun from Pisces to Aries according to the Indian astrological system) Tyagaraja is taken in a procession. An eighteen day festival is performed in the Tamil month of Vaikashi (when the sun resides in the sign of Taurus). Festivals related to Nataraja (the Lord of Dance) are held during the month of Aani (Gemini). Several special services are performed to the Emerald Lingam on the full moon night in the month of Purattasi (Leo). Besides, Navaratri, Kartikai Deepam and Panguni Uthiram are also celebrated here with much devotion.

How to reach Darbaranyeswarar Navagraha Temple

Tirunallar is located near Karaikkal (5 km) and Nagappattinam, and is well connected by road to many other towns. Direct bus services are also available from Karaikal and even Chennai. Thirunallar to Bangalore (Karnataka) is around 298 km.

Thirunallar is 59 km from Kumbakonam, 35 km from Mayavaram (Mayiladuturai), 140 from Pondicherry, 100 from Thanjavur, 150 from Trichy. Tirunallar can easily be accessed from Mayiladuturai or from Nagapattinam.

The nearest domestic airport is the Tiruchirappalli Airport, about 160 km from Tirunallar. The nearest international airport is at Chennai, around 300 km away.

Nearby Tourist Attractions in Tirunallar

Karaikal Beach, one of the natural beaches in the Tamil Nadu, is just a short drive from Tirunallar. The 12th century Sri Varadaraja Perumal Temple is 7 km from Karaikal.