Posted by Abhilash MS
Karkidaka Vavubali 2021 is on August 8. Karkidaka Vavu Bali is an important Hindu religious observance performed in honour of the forefathers in Kerala, South India. Vavu is Amavasya or no moon day and Karkidakom (mid July to mid August) is the last month of Malayalam calendar. For Tamilians, this Ancestral worship is known as Aadi Amasvasi or Amavasya which is also dedicated to the forefathers. This year Karkidaka Vavu Bali ritual is on 8 August 2021.

The importance of Karkidaka Vavubali

According to the Hindu custom, if a member in the family dies, the younger ones in the family have to perform Bali (also called Pithru Tharpanam) to make the soul get eternal peace. The Bali carried out on Karkidaka Vavu (Karkidakavavu) day is called Vavubali and is of great importance. It is believed that performing Bali Tharpanam on Karkidaka Vavu day will help to appease the souls of ancestors brings good fortunes and prosperity. 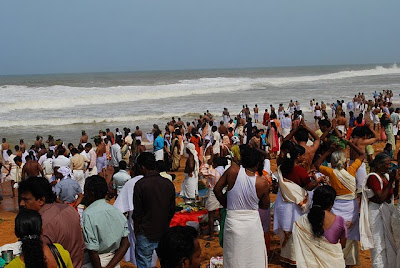 Usually the Bali or Pitru Tarpanam is performed calculating the date and nakshatra on which the family member died. However, Karkidaka Vavu bali is performed regardless of the date or nakshatra of death of the deceased member. Also, the rites are conducted as per the Hindu custom and performed in beaches and waterways. One of the noted feature of Karkidaka Vavu bali is that almost all Hindus in Kerala make it a point to perform Karkidakavavu Bali and conduct ancestral worship on this day.

According to Hindu Kerala tradition, people observe fast on the day before performing the ritual. The persons performing the rites are guided by priests. Taking a dip in the sacred water before and after the ritual is necessary. Usually, Karkidaka Vavubali ritual is performed only men. However, in some places, women also take part in this ritual.

The important temples and places where Karkidaka Vavubali is performed include Shanghumugham Beach in Thiruvananthapuram, Papanasam Beach in Varkala, Sri Parasurama Temple in Thiruvallam, Aruvikkara in Trivandrum, Vennimala Sree Rama Lakshmana Temple Kottayam, Thrivikramangalam, banks of river Periyar at Aluva, Bharathapuzha at Thirunavaya in Malappuram, Kozhikode Beach and other temples and beaches.