Posted by Hindu Devotional Blog
Gajendra Moksha Stotra Lyrics and meaning in English. Gajendra Sthuthi is a powerful mantra addressed to Lord Vishnu and is taken from the 8th Skanda and third chapter of Bhagwatha Purana. According to a popular legend, Mahavishnu saved Gajendra (the king of elephants) from from the clutches of crocodile when Gajendra prayed this stotra. It is believed that chanting this powerful prayer will provide one with the power to face any difficulties in life and come out of unwanted situations. English meaning of the prayer is written by Sri PR Ramachander.

Salutations to the all powerful divine God denoted by “OM”,
Due to whom   the body and mind are made conscious,
And he also exists within them in the form of the seed for the spirit.

I surrender to that God in whom this universe
Was born, exists in essence and was made in to the divine,
Who becomes all the world that we see,
And who is different from it in his physical and spiritual form.

May I be protected by the God who revealed himself,
Who reveals himself as the universe at times of creation,
Who keeps the universe as an illusion at the times of deluge,
Thus revealing himself sometimes and hiding himself at other times,
And who sees them as a witness in both these states.

Over time when all the worlds and their guardians,
Are reduced to the five elements  and all their causes,
Only Impenetrable and fathomless darkness , remains,
Coming out of that darkness, the divine Lord shines  from within that.
And his form thus exhibited is not understood even by the devas and sages,
Like the actual form of the actor in a drama is not known to the spectator,
And definitely the ordinary beings is at a loss to describe it,
Thus making his actions unfathomable and let that God protect me.

He whose auspicious feet  is desired even  by,
The great sages who are bereft of any attachments ,
Who have benevolent feeling towards all  beings,
And observe penance and sacred vows in the forest,
Is the divine one who is in all beings ,
And is my only source  of support.

Salutations to him who does wonderful acts,
Who is beyond birth and death and the Brahman
The one without endless power and one who
Neither has a form or is formless

Salutations to him who gives us Kaivalya,
And who makes us realize the infinite joy of salvation,
And one who can be seen by the real sages  with purity of mind,
By the constant practice of  detached  activity .

Salutations to one who knows the form,
Who is lord and witness of everything,
Who is the Purusha and who is the seed of every being,
And salutations to the basic nature which exists

Salutations to one who watches the health of all senses,
And also the objectives of all such senses,
And to him who  is the one who activates,
The immobile nature that follows you like a shadow.

Salutations  fo him who is the cause of everything,
To him who is not caused by anything and also,
The wonderful cause  which does not become what it causes,
Salutations to him who is the ocean of Thanthras,
To the personification of saintliness and refuge of the great.

Salutations to him who hides similar   to the fire  of consciousness,
That is hid in a piece of wood of qualities and characters ,
Whose creative mind is aroused when  the characters are disturbed,
Who comes shining before those who do detached actions.

Salutations to the God of boundless compassion,
Who frees those ignorant beings from the ties of this world,
As soon as they surrender to him though ,
He himself is ever free and is endowed to the great mercy,
And he also shines in the minds of all as their own soul,
Though he himself  is the limitless Para Brahman.

Salutations to that God ,who  is not attainable to those,
Who are attached to themselves, their sons, house , wealth and friends,
Who himself is completely free of all attachments to senses,
And who is brought in to their own hearts by his devotees,

Whosoever prays you for Dharma,
Desire , wealth or salvation,
They get  their desires fulfilled,
And even when your devotees ,
Do not ask anything from you,
You give them  an imperishable body ,
And I request from you  salvation for me.

Those devotees  who in lonliness , pray you ,
Without wanting  gold or similar things,
And are  not even desirous of salvation,
And sing  your wonderful  story,
Drown themselves in the ocean of bliss.

I saute that complete God who never dies,
Who is the divine God much beyond Lord Brahma,
Who is not clear  and is available for spiritual seekers,
Who is beyond senses like  the very micro things,
And who does not have an end and is primeval.

I salute him from whose very micro form  are created.
Brahma and others, devas, all worlds , all moving and stable beings,
Assuming very different names and bear fruit.

Similar to the  heat generating  from the fire,
And rays generating from Sun  ,ultimately ,
Merges  in to the form from where they came ,
Wisdom, mind , senses  and the body,
Originate  from you and merge in you.

I do not desire to survive for what I have to do here,
As an elephant enveloped inside out , by ignorance,
I do desire that this veil of ignorance is lifted,
And I get salvation from this world as an elephant.

I worship that God of Yoga,
Whom only the Yogis who have burnt their Karma,
Can visualize by their heart,
And see him by the practice of yoga.

Salutations to him whose three fold power is unstoppable,
Who has all the characteristics, Who protects those who surrender to him,
And who cannot be attained by those who have not won over their senses.

I am searching that God, whose power can never be surpassed,
And due to the illusion of ego created by him,  people think that ,
Their body is their soul and are not able to understand their real soul. 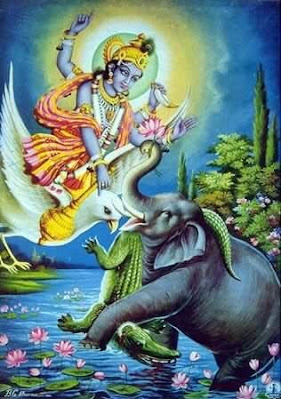 Gajendra Moksha Stotram in other Languages