Posted by Abhilash MS
Maricha, one of the characters in Ramayana, plays the most notable role in Ravana’s kidnapping of Sita. Once, demon Sunda (son of Jamba or Jharjha) attacked the hermitage of Agasthya Rishi. The angry sage burnt him by his meditative powers. On Sunda’s death, his wife Yaksha Thataka and his sons Mareecha and Subahu attacked Agastya. The sage cursed them to become demons.


Sage Vishwamitra was performing a sacrifice. He was tormented by Tataka and her sons. Visvamitra approached Dasaratha, the king of Ayodhya, and requested him to send his eldest son, Rama to protect his sacrifice. Though with reluctance, Dasaratha sent 13-year old Rama and his younger brother Lakshmana with Visvamitra. Near the forest of Tataka, the demoness attacked them. Rama, aided by Lakshamana, slew her with his arrow. Vishvamitra reached his ashram and began his sacrifice. On the sixth day, Maricha and his brother Subahu, appeared and tried to destroy the sacrificial fire. Rama fired his arrow and Maricha was thrown hundred leagues away. The sacrifice was completed successfully. Under the guidance of Visvamitra, Rama wed Sita, the adopted daughter of Janaka and the princess of Mithila.

Maricha fight with Rama in Dandakaranya


Later, Dasaratha directed Rama for an exile in forest for 14 years, at the behest of Rama's step mother Kaikeyi. Rama proceeded to forest. Lakshmana and Sita followed him. The trio travelled through the Dandaka forest to the banks of the river Godavari, where they built a hermitage at Panchavati. Once, Maricha saw them and attacked them to wreak vengeance. Rama killed Maricha's allies, but his arrow narrowly missed Maricha, who fled. Surpanakha, the sister of Ravana, requested Rama to marry her. Rama refused and directed her to Lakshmana. Lakshmana joked at her. Surpanakha attacked Sita. Lakshmana cut out her ears and nose. Surpanakha reached Lanka and prompted Ravana to steal Sita. 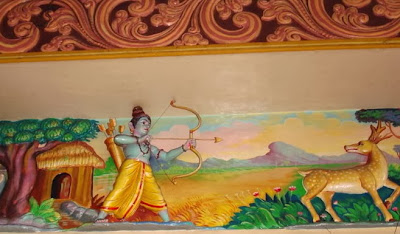 Ravana went to meet his uncle, Maricha. He told Maricha to turn into a golden deer with silver spots and graze near Rama's ashram. On seeing the deer, Sita would surely tell Rama and Lakshamana to catch it. When they would leave Sita alone, Ravana would abduct her. Rama, aggrieved by Sita's separation, would be easily killed by Ravana. Maricha dissuaded Ravana. Ravana reiterated his plan and finally Maricha agreed.

Maricha and Ravana flew to Panchavati. Maricha assumed the form of a beautiful golden deer, which had silver spots. It appeared in the vicinity of Rama's ashram. Sita was collecting flowers. The golden deer lured Sita, who called Rama and Lakshmana to see it. Lakshmana sensed foul play and suggested that the deer was Maricha. Sita persuaded Rama to get her the deer. Rama asked Lakshmana to take care of Sita and went after the deer. Maricha ran, followed by Rama. After a long chase, Rama shot him down. Maricha took his real form and cried out mimicking Rama's voice "Oh Sita! Oh Lakshmana!" Sita asked Lakshmana to go and search for Rama. Lakshmana insisted that no one could harm Rama. Worried Sita ordered Lakshmana to go. Lakshmana reluctantly left. Immediately, Ravana appeared as a mendicant. Sita stepped forward to give him alms and he kidnapped her.