Posted by Abhilash MS
The life and journey of Rama is described the epic Ramayana, composed by the Rishi Valmiki. Ramayana is the combination of the words Rama and Ayana, meaning "Rama’s Journey". It consists of 24,000 verses in seven books and 500 cantos (Sargas).

According to the story, Dasharatha, the king of Ayodhya, had three wives and four sons. Lord Rama was the eldest and his mother was Kaushalya; Bharata was the son of his second wife, Kaikeyi. Lakshmana and Shatrughna were the other two twins from his third wife Sumitra. The King decided to coronate Rama as the next king. However, Kaikeyi wanted her son, Bharata, to become the king. On the insistence of Kaikeyi, Dashratha sent Rama to exile in the forest for fourteen years. Rama’s wife Sita and his younger brother Lakshman followed him. 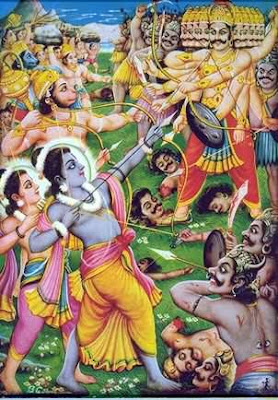 During the exile, Sita was imprisoned by Ravana, the ten-headed King of Lanka, who tried to persuade her to marry him. Lord Hanuman carried Lord Rama and Lakshmana on his shoulders while they were searching Sugreeva, the king of Vanarav in Kishkindha, and helped them to find Sita. Lord Rama, with the help of Hanuman, Sugreev and Bali attacked Ravana. After a furious battle, Rama succeeded in killing the demon king and released Sita from the control of Ravana. Rama then returned to Ayodhya where they ruled for many years, and had two sons – Luv and Kush.