Posted by Abhilash MS
Story of Lord Hanuman and Suvannamaccha, the golden mermaid or golden fish. Suvarnamatsya is the equivalent word in Sanskrit. The story of Suvarnamatsya is not found in Valmiki Ramayana. It appears in the Cambodian and Thai versions of Ramayana. Suvarnamatsya was a daughter of Ravana. She was half fish and half human in her body.

In the Yuddhakanda of Ramayana, the episode of building a bridge (Setu Bandhan) is available. Sita was kidnapped and was held captive by Ravana. Preparations started for the battle Ravana and Srirama. Hanuman advised Lord Rama to build a bridge to Lanka from India. Sree Ram gave orders for the construction of the bridge. All the monkeys under the leadership of Hanuman earnestly began work. They threw huge rocks into the sea to make a foundation for the causeway. The work progressed rapidly. After a few days, they noticed that there was something wrong. The volunteers reported to Hanuman that each day they threw huge rocks into the sea and the next day those were disappearing.

Anjaneya collected a few volunteers and marched into the waves while others continued to throw rocks into the sea. Hanuman found a large number of mermaids (matsyakanyas) underwater. As he watched he could understand that as soon as a new rock was tossed in, the mermaids took the rock and carried it away. Hanuman searched for their leader. He spotted a lovely mermaid who was supervising the others. He swam towards her, but she skillfully evaded him. Again and again he tried, but his attempts failed. 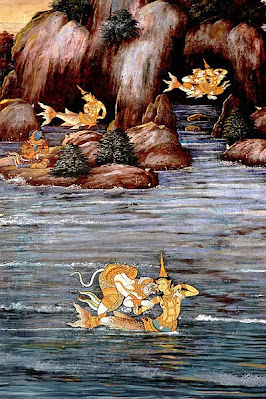 The story takes a turn now. Hanuman, by way of continuously watching that mermaid, found himself as fallen in love with the creature. He changed his tactics and began to silently woo her. She responded to him positively and soon they were together at the bottom of the sea. Later, Hanuman asked the mermaid why she was stealing the rocks. She told him that she was Suvannamaccha, a daughter of Ravana. When Ravana saw Hanuman's monkeys building a causeway, he instructed Suvannamaccha to stop it somehow. Hanuman told the mermaid why he was building the causeway. He told her about the abduction of Sita, the battle between Rama and her father Ravana, and the consequence that he would be finished if he did not finish the causeway within seven days.

Suvannamaccha’s eyes were filled with love and compassion. She promised that she would not prevent Hanuman from completing his mission. Her mermaids underwater would also return all the stolen rocks to the causeway. Thus the bridge was built. Hanuman Suvannamaccha couple gave birth to a son named Mudchanu.