Posted by Abhilash MS
Putrakameshti Yagam, sometimes referred as Santhana Gopala Yagam, is a special Yajna performed by Hindus for being blessed by a child. Puthra Kamesti Homam is a kaamya-karma which means those rituals or karmas which are conducted with a specific purpose.

The earliest reference to Putrakameshti Yajna can be seen in Ramayana. Dasharatha, the king of Ayodya and a descendant of the Ikshvaku dynasty, performed the yajna upon the advice of Vashishta Maharshi. The homa was done under the supervision Rishyasringa or Shringi Rishi, who was an expert in Yajurveda. The guidelines for the Yajna is mentioned in Yajur Veda. Upon successful completion Lord Agni Deva, the God of Fire appeared from the yagnakunda and gifted Dashrath with a pot of kheer advising him to distribute it among his three queens Kaushalya, Sumitra and Kaikeyi. 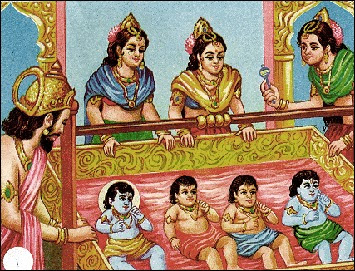 King Dasharatha was blessed with four sons – Kaushalya gave birth to Sri Rama. Lakshmana and Shatrughna were born to Sumitra. And Kaikeyi gave birth to Bharat.