Posted by Abhilash MS
The Hindu Epic Ramayana is divided into seven kandas (books) which deals with the major events in the life of Lord Rama, the 7th avatar of Mahavishnu. Ramayana was penned by Sage Valmiki and is written in a 32-syllable meter called “anustubh”.

The 7 Kandas of epic Ramayana are

Bala Kand begins with the story of Dasharatha, the king of Ayodhya, performing Putrakameshti Yagna - a fire sacrifice for attaining a child. As a result King Dasharatha is blessed with four children Lord Rama born to Kausalya, Bharata is born to Kaikeyi, and Lakshmana and Shatrughna are born to Sumitra.  Balakanda of Ramayana depicts the life of Lord Ram’s childhood and his marriage to Sita Devi.

Ayodhya Kand of Ramayana narrates the arrangements for the coronation of Lord Rama and his exile into the forest for 14 years for the sake of his father's honour. 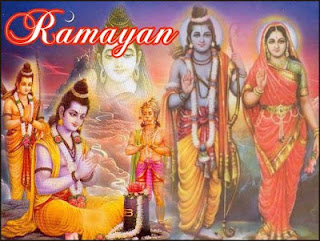 In Aranya Kand, Sage Valmiki tells the story of Lord Ram’s life in the forest and the kidnapping of Sita by Ravana, the demon king of Lanka.

Kishkindha Kand narrates the story of Lord Ram and Hanuman. The story of vanara King Vali (also known as Bali) and Sugriva of the kingdom of Kishkindha also features in this kanda.

Sundara Kand depicts the story of the Hindu God Hanuman and his travel to Lanka in search of Seetha.

Uttara Kand of Ramayan depicts the story of the birth of the two sons of Lord Ram - Lava and Kusha and their coronation as the throne of Ayodhya. Being the last part of Hindu epic Ramayana, this kanda also describes about Lord Rama’s final departure from the world.