Posted by Abhilash MS
Navadurga or Navdurga are the nine forms of Goddess Durga worshipped mainly during the Navratri Festival. The most commonly accepted nine manifestations of Durga Mata are the one found in Devi Mahatmya. Read about Navratri Festival

The Nine Goddesses Names are


According to Hindu tradition, Navadurga forms are believed to be the most sacred aspects of Goddess Durga Devi. Each of these nine goddesses has a special significance and if worshipped with utmost devotion during Navaratri Festival is believed to increase the divine spirit and fill the life of devotees with renewed happiness. 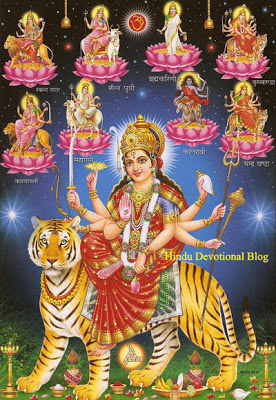 The names of nine different forms of Maha Shakti are also narrated in ‘Devi Kavacha’.
--