Posted by Abhilash MS
Guruvayur Temple or Guruvayoor Temple is one of the most famous Lord Krishna temples in India, situated in the town of Guruvayur, in Thrissur District of Kerala. Guruvayur Sri Krishna Temple enshrines Lord Krishna, the eighth avatar of Lord Vishnu, as the presiding deity. Shri Krishna is known here by different names such as Unnikannan (Baby Krishna), Unnikrishnan, Kannan, Balakrishna, and Guruvayoorappan. The idol was once worshiped by the Lord Mahavishnu himself in Vaikunta and hence Guruvayur Sri Krishna Temple is known as Bhooloka Vaikunta - The Heaven on Earth. Sri Guruvayoorappan Temple is also renowned as the Dakshina Dwaraka (Dwaraka of South).


Guruvayur Temple is said to be built by Guru (preceptor of Gods) and Vayu (God of winds), and hence the place came to be known as Guruvayurpura and later reduced as Guruvayur. Guruvayur has become the most famous pilgrimage center in Kerala mainly due to the five devotees, namely - Poonthanam, Melpattur, Vilvamangalam, Kururamma and the Prince Manadevan (Zamorin). This important and famous pilgrimage for Hindus is about 29 km north-west of Thrissur. 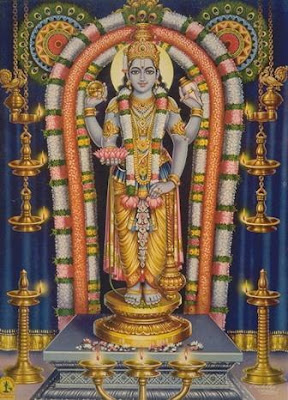 The unique feature of the idol of Sree Guruvayoorappan is that it is built out of a rare stone called Patala Anjana. The Lord is seen in the standing posture with four hands (Chaturbahu) carrying the Sankhu (conch), the Sudarshana Chakram (a serrated disk), the lotus and the mace. Legends say that the idol is more than 5000 years old. The idol was once worshipped by Mahavishnu and then handed it over to Lord Brahma.


Other Special Features of Guruvayur Temple

It is here that the Melpathur Narayana Bhattathiri composed his Sanskrit devotional poem called Narayaneeyam. The temple is well-known for its healing powers and is the site for Annaprasanam, the first rice-giving ceremony of a child. Every year, the 28th of Malayalam month Vrischikam is celebrated as Narayaneeyam Day.

Devotees conduct Tulabharam where a devotee is weighed against his choice of material. Some of the common items used for Thulabharam include banana, sugar, jaggery, coconut, or gold. Besides Tulabharam, elephants are also offered to the Lord. The feeding of these elephants is called Anayoottu. Other offerings include Prasadaootu, Alroopams, Picking up Kunnikkuru and Sayanapradakshina.

Guruvayur Utsavam or Guruvayoor Annual Festival is held for ten days. It begins on the day of Punartham Nakshatra (Pushya star - the 8th asterism) in the Malayalam month of Kumbham (February - March) and ends after the Guruvayoorappan Aarattu on the 10th day.

Please note that the Temple timings may change on certain special occasions and also if there is any Udayasthamana pooja.

Guruvayoor is well connected with other parts of the country by road transport. Both KSRTC and private bus services offers interstate bus services to almost all major cities in south India including Palani, Madurai, Mookambika, Ooty, Coimbatore, Dindigul, Salem, Mysore, Chennai, Mangalore, and Udupi. National Highway 17 (NH 17) passes through Kunnamkulam about 8 km away from Guruvayur.

Places to Visit Near Guruvayur Temple